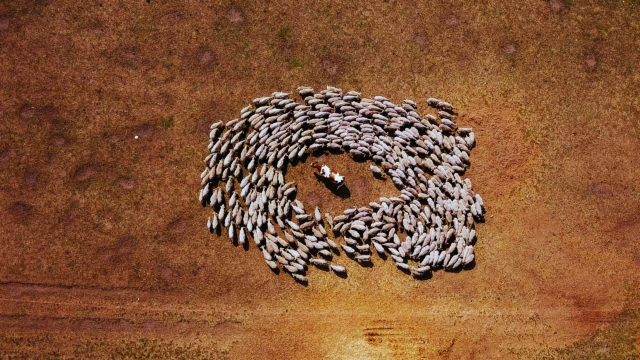 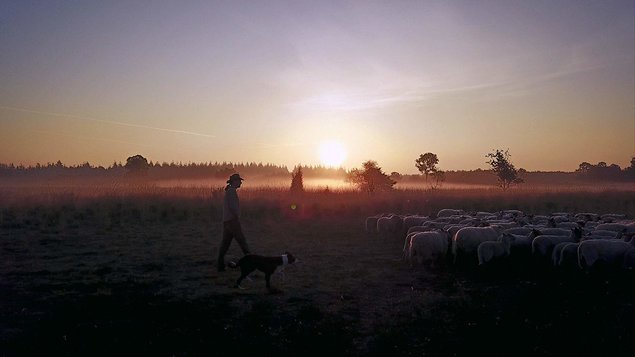 a Google translation to English

Marx vs Weber Sheep Hero: It is no longer a country for shepherds

“Open spaces. Peace. Freedom.
My choices, not someone else’s.
That’s all. A simple life. So I thought. “
(Stijn Hilgers)

Yes, so thought Stijn Hilgers: a Dutch shepherd with a romantic vision of life and with idealistic goals to pursue, who finds himself immersed in a social and productive system capable of depriving him of his freedom.

The director Ton van Zantvoort with Sheep Hero, simply showing the occurrence of the life of a man and his family in the Dutch plains, makes a documentary with strong social nuances and significant political implications. However, the Dutch artist does not directly attack the capitalist system, but, describing and not explaining, reveals one of the infinite stories that are tragically denied to face the incessant search for profit. The criticism of the current neoliberal system, therefore, emerges only later, when the viewer becomes aware of the film content, empathizing with a man who wanted to do only what he loved most from life. Thanks to the formidable work of Ton van Zantvoort – winner of the prize for Best Director at Torino Underground Cinefest -, whose camera is almost invisible, the viewer is as if he were catapulted into that country landscape together with the characters and their sheep.

Sheep Hero, presented at the Turin Underground Cinefest independent film festival, is therefore not the story of a hero who triumphed – the hero of the sheep -, but of a hero who unfortunately, not through his fault or bad luck, does not have did it. To increase profit, landowners prefer specific machines compared to a flock of sheep, favoring technique over nature, innovation to tradition. Condemned to failure and fall, Stijn will have a tragic fate because, just like a Greek hero subjugated to the will of the Gods, this shepherd is enslaved by the forces of the only God of the contemporary: money, what Karl Marx already defined in 1844 alienated power of humanity.

The production system in which we are all immersed, in fact, does not take on the same appearance for all men: there are those who remain afloat and instead those who drown in a deep surface. In what is no longer a country for shepherds, the capitalist system becomes destiny for the West according to the sociologist Max Weber who, in the metaphor of the steel cage, reveals how the contemporary subject is constrained – oppressive for small fish and functional for the big ones – which condemn man to a condition of tacit alienation.

Stijn Hilgers is held hostage by an invisible cage whose bars, in the form of rules and laws to be respected necessarily, make his possible escape impossible. Still, the pastor tries to force them, embodying idealistic spirits such as to make him a true contemporary hero, through manifestations, conferences, meetings with public bodies and events in the name of creativity.

“Companies have power, but we have the truth.”
(Stijn Hilgers)

However, however much Stijn and the other pastors may incarnate, it will never be enough to face the established order. He, as a good shepherd, will be forced to follow the flock, chased by a dog who, instead of barking, screams praising capitalism.

In the end of the documentary we discover that Stijn, together with his family, after seeing their dreams and ideals trampled by an invisible, yet tragically tangible entity, today are looking for work and a stable place to live.

It seems that for now history has proved Weber right instead of Marx: the invisible steel cage has no destiny, as the communist philosopher believed convinced that it should implode on itself given the obvious internal contradictions, but it is a destiny , the fate of the West reveals the German sociologist. In this way, revolution does not appear possible, but the need to find some fragments of freedom from within. Yet, all that remains is to resume the Marxist warning, perhaps only whispered in a paraphrased form by the director of Sheep Hero, for which: “Pastors of the whole world, unite!”

With an authoritative photograph capable of capturing all the nuances of the Dutch plains, Ton van Zantvoort needed to tell this story, paying tribute to all those shepherds who, unfortunately, will be condemned to interrupt the path to become what they are, alienated from a system productive.

If historical and economic progress continues to continue on the same road, in about ten years there will be no more shepherds on this earth, no flock of sheep that graze the ground controlled by a dog. Fortunately, there was Ton van Zantvoort who, with Sheep Hero, told a story that otherwise we would all have dramatically forgotten.

A simple life. So I thought.
(Stijn Hilgers)

“-God is dead, Marx is dead, and I feel unwell- (Woody Allen). 23 years old, I study philosophy in Bologna, but I come from the mountains. Philosophy and Cinema, essentially the two reasons why I get up in the morning.

Who do you prefer Marx or Weber?