Day is Done * is an intimate and confronting documentary film about the extraordinary daily routine of Peter Oud, a man who hasn’t been outdoors for two years. In an extremely personal way we experience how Peter’s life is disappearing in the abyss. Peter died in February 2010.

The young director got to know Peter through his side line job at Home- care, where he saw an impressive shopping list when they first met:
six packages of strong rolling tobacco, three boxes of beer, one ham, one cheese.
When Hendrikx quits this job he keeps in touch with Oud. Although inexperienced, he strongly feels the urge to tell his story about this remarkable man who is left to his own devices, isolated from society.

From the director
In the summer of 2008 I worked at Home-Care (to earn money for the holidays) and one of the people I had to give supportive care was Peter Oud. I had to help him by doing groceries, so he wrote down a shopping list when I visited him the first time. ‘Six packages of strong rolling tobacco, three boxes of beer, one ham, one cheese’ it said. It was the most beautiful shopping-list I had ever seen.

After the summer I quit the job, but kept in touch with Peter. Slowly but surely I got to know him better and discovered he didn’t see friends nor family. All he had was a cat and a shed, isolated from society and left to his own devices (Home Care often didn’t show up and the contact with the doctor was not intense at all).
What impressed me the most was the routineous way he lived his life, an extraordinary routine I never saw before.

“It would be nice to know people could see that there are people living a life like me”, Peter said.
But he didn’t necessarily wanted to be filmed. From that moment I decided to bring the camera with me every visit. Not to use the material for film, but to let Peter get used to the camera. I wanted to show Peter’s life in an intimate and confronting way, without plain and without reforming the reality. No matter how shocking or raw this reality would be. After three months I felt Peter didn’t know the difference between the camera turned on or off.

DAY IS DONE * behind the scenes

a NEWTON film in coproduction with Guido Henrikx
30 minutes, November 2010

special thanks to:
Peter Oud
Martijn van Geffen
Oud’s family
Elise de Groot
and everybody that made this film possible 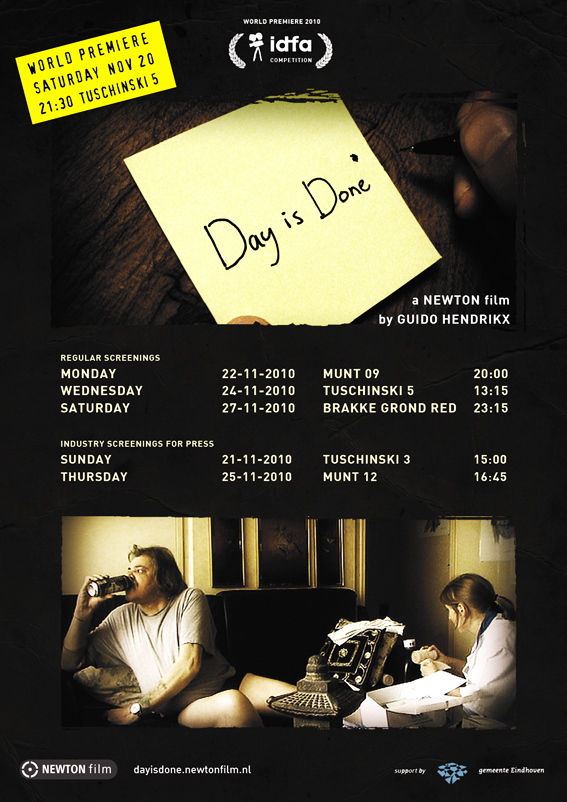